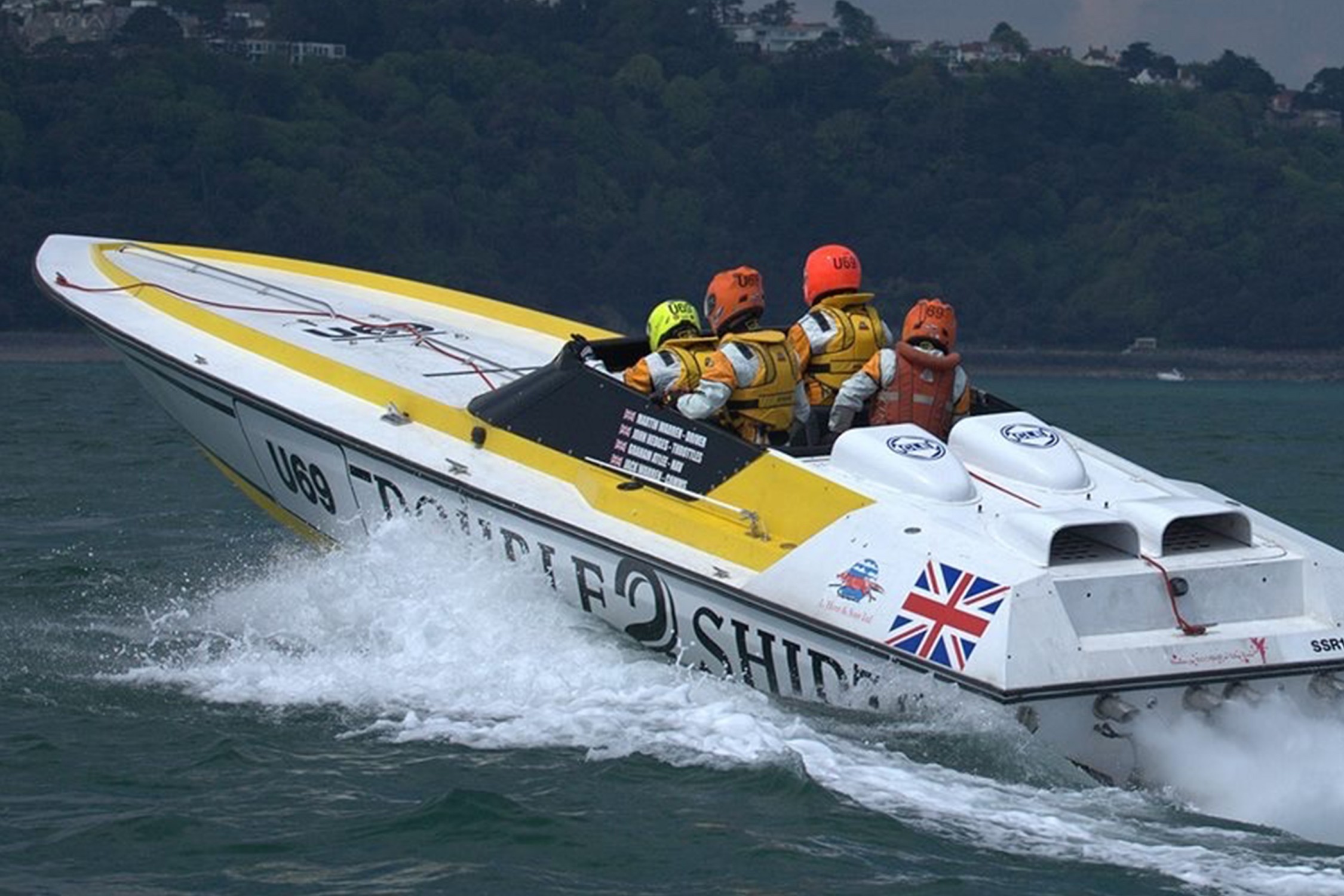 Lying abandoned in a Southampton Boatyard, Dan and his father couldn’t resist the temptation to purchase her with a view of renovating the vessel and racing her again in the Historic Offshore Powerboat Class.  With one engine missing, this was not a project for the faint of heart, but with Dan’s superb engineering skills, he had no qualms in taking the project on.

“As soon as the news broke that I had bought the boat, I was totally shocked at the level of interest that was generated as the boat seemed to have gathered quite a fan base over the years,” commented Dan.  “Designed by Don Shead, she has had 57 podium finishes and an amazing racing career”.  Original named ‘ABO’, she later became ‘Radio Rentals’, ‘Macho’ and ‘Manhattan’ amongst a host of other names but she is world famous under the name ‘Double 2 Shirts’; the livery she carries to this day.

Capable of speeds in excess of 80 mph and consuming up to a gallon of fuel per minute, (per engine!) she can still turn heads wherever she goes.

Dan is not unaccustomed to refitting high-spec powerboats as he completely rebuilt his current ‘Fomula’ 311 which runs on twin MerCruiser 500hp EFI Race Engines with ‘Kaama’ surface drives.  “I took her out on the most recent Cowes to Torquay race to join the other competitors and give them a run for their money,” says Dan with a twinkle in his eye.  “This year I will be going even quicker!”

What is clear when you talk to Dan, is that he shares the same passion and attention to detail on every job that Marine Power undertakes whether it’s servicing a 3hp outboard through to tuning high-performance race engines.  His passion shines through and if you see a big yellow powerboat out on the Solent this year, make sure you give him a wave!

PS – Please don’t share this article as he hasn’t told his wife yet!

Request a call back

If you would prefer a customer advisor to call you back to discuss your requirements, please complete the form.

Buy on-line or speak to a specialist to get the right part fast from one of our branches or straight to your door.

Call our Service Department or request a call back. 10% Labour discount for all BoatFolk customers

Sign up to receive our newsletter and exclusive offers.